INNER SOUND International
(a US corporation)
licensed by OMZIN VOF 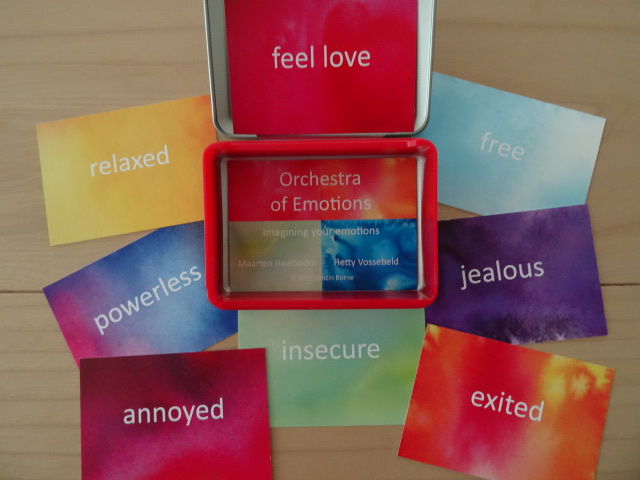 Be the Conductor.
Guide others
with the Orchestra of Emotions

The Orchestra is a set of 43 emotional intelligence cards, each with a single word or phrase of a feeling or emotion on a distinct colored background. Created originally for Dutch children of reading age, now they are used worldwide with all ages in education, counseling, therapy, business and personally for emotional mindfulness. They are simple & intuitive to use.

Soon to be available in Spanish, German, French, Japanese and Arabic.

ABOUT THE ORCHESTRA OF EMOTIONS' BOOK

Gain greater insight of Orchestra of Emotions use for yourself and others with detailed explanations about each card plus many exercise suggestions to delve the depths of your emotions and feelings for greater insight and movement.  Maarten  Haalboom, the creator of the Orchestra of Emotions describes the fundamental concept surrounding the card’s use he developed first with children beginning in 1998:

“During the first meeting with the child, I often find there are underlying feelings and emotions, conscious or unconscious, that influence their behavior.  To get more insight into this, I use the Orchestra of Emotions cards. By using them, I pay attention to what the child feels and experiences – what caused that feeling, what effect it has and what could be done to improve the situation. It is a process of recognizing and acknowledging the feelings, then devising a strategy of action, and then carrying it out. Initially, all the children made the cards themselves, a way that I still use occasionally.

The metaphor of the orchestra is easy to explain & understand. Most children have experience with music and most know what an orchestra is…. The orchestra metaphor is multi-faceted and provides a wealth of perspective for all concerned: there are many members (feelings & emotions) who constantly interact with  each other at both the rehearsals and  performances under the leadership of a conductor. The ‘music’ that results is also experienced by the listeners – the audience. For example, parents listen to their child’s orchestra of emotions and their orchestra of emotions become involved as well.”

BASIC EXERCISE: Using the concept of how an orchestra is laid out, lay the cards out one by one in front of you, either grouped into sections or standing alone – exactly where you feel them to be. Some cards you may place far away, others quite close. Then the question is to look at the cards, a reflection of your inner emotional world, and ask questions about why you have put the cards where you have. (There is no right or wrong in your choices. They are what comes from you.)  This opens up many possibilities for dialogue and understanding of actions that you make in a specific situation or in life in general.  For example, you may become angry only after you have passed through other unconscious feelings and emotions first and then anger is the final step. By becoming aware of  the whole chain of feelings, it is easier to make changes so as not to always arrive to anger – if that is your goal.
A final question: Who is the conductor?